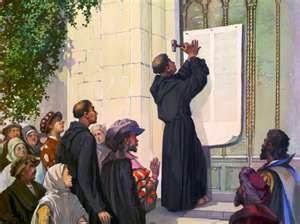 On OCTOBER 31, 1517, an Augustinian monk named Martin Luther posted 95 debate questions or "theses" on the door of Wittenberg Church, which began the movement known as "the Reformation."

Luther's initial objection was to the methods employed by Johann Tetzel to sell indulgences. He was then fiercely attacked by Johann Eck.

In 1521, 34-year-old Martin Luther was summoned to stand trial before the most powerful man in the world, 21-year-old Holy Roman Emperor Charles V.

Charles V of Spain had an empire that spanned nearly 2 million square miles.

The sun never set on the Spanish Empire.

It included lands from Europe to the Netherlands, to the Far East, North and South America, and to the Caribbean.

The Philippine Islands were named after his son, King Philip II of Spain.

At a trial, called the Diet of Worms, Charles V initially dismissed Luther's theses as "an argument between monks."

Luther was ordered to recant without having had his theses addressed. He responded ...