Virginia's George Mason - Purpose of Bill of Rights is to Limit Government! 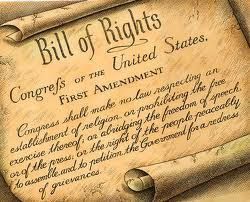 "Congress shall make no law respecting the establishment of religion, or prohibiting the free exercise thereof."

Thus began the first of the Ten Amendments, or Bill of Rights, which were approved SEPTEMBER 25, 1789.

George Mason wrote the Virginia Declaration of Rights, which Jefferson drew from to write the Declaration of Independence. George Mason stated before the General Court of Virginia: "The laws of nature are the laws of God, whose authority can be superseded by no power on earth."

George Mason's phrase was echoed by Jefferson's: "The laws of nature and nature's God."

At the Constitutional Convention, George Mason called for an end of the slave trade, desiring to immediately ban any more slaves from being brought into the country and that slavery should not spread into new states. He called slavery a "slow poison" and argued for ...