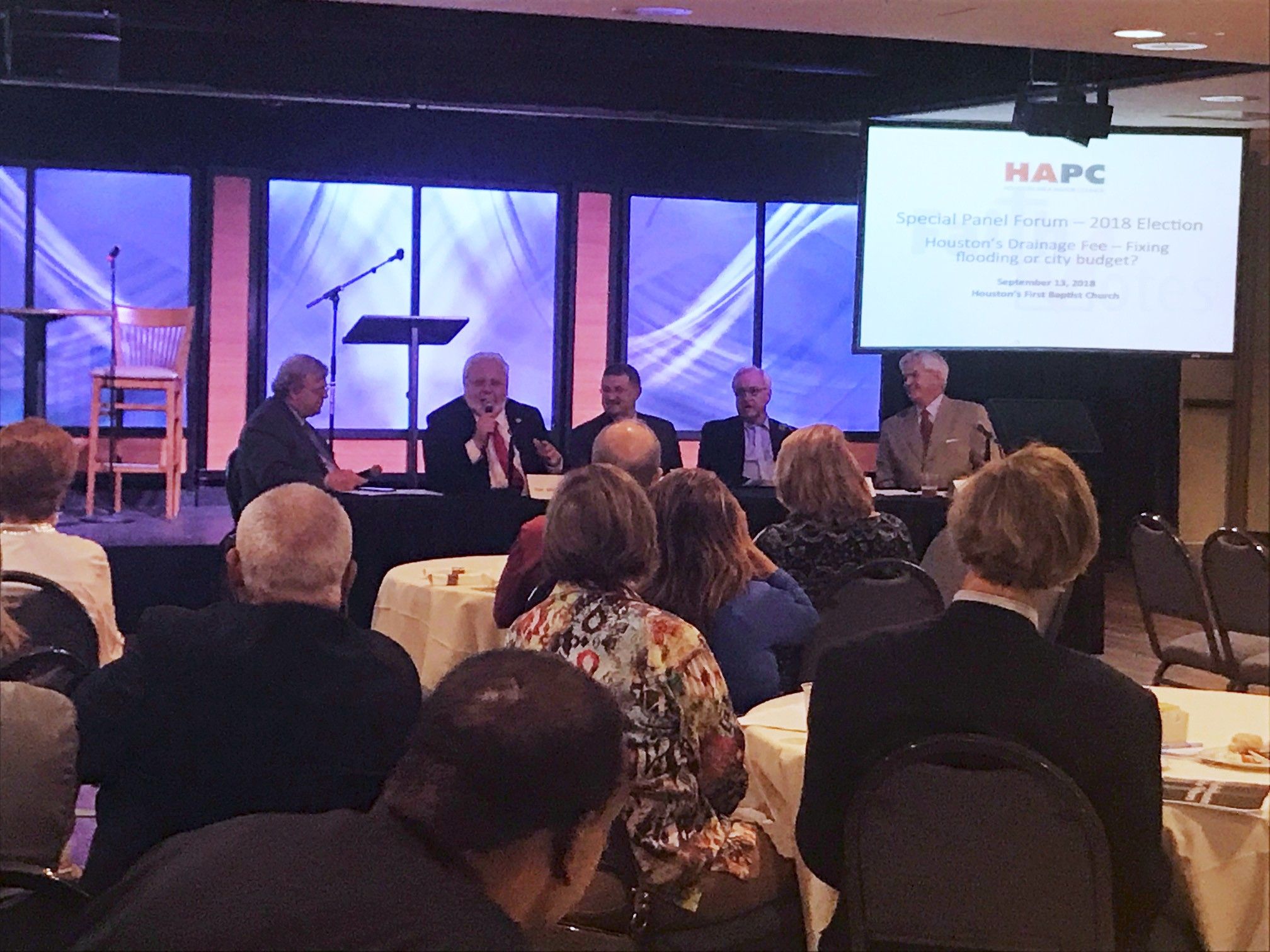 Pastors, elected officials, candidates and community leaders gathered at Houston’s First Baptist Church on September 13 for a briefing on a proposition being voted on – again – by City of Houston citizens that proposes a “lock box” for drainage fee revenues.  The luncheon also included an opportunity for candidates on the ballot in November and who were in attendance an opportunity to share about their position and credentials.  Candidates included both incumbents such as Rep. Duane Bohac, Judge James Lombardino, Judge Katherine Cabaniss and others as well as candidates seeking various offices.

Pastors Hernan Castano and Willie Davis of the HAPC Executive Council gave an update on the meeting with a small group of HAPC lead pastors with Mayor Sylvester Turner to discuss the use of “Drag Queens” for the Children’s Reading Hour in Houston Public Library (a summary article was included in last week’s PastorGram newsletter).

HAPC hosted this because we were deeply involved in 2010 when a charter amendment was put on the ballot supposedly just creating a “lock box” for funds that would only be used for flooding and drainage improvements.  We called it the “Rain Tax” and it included a massive new fee on every property in the city including churches and schools that would have financially destroyed churches all over the city who had property but limited finances and/or small congregations.

HAPC helped organize the Coalition for a Greater Houston with elected officials, business leaders and community groups in nearly defeating Proposition 1 (2010) and was then successful in pressuring Mayor Annise Parker and the city council to exempt existing churches and schools (all future construction following 2011 has been subject to the fee).  The coalition also filed a lawsuit challenging the ballot language as deceptive because it did not mention a new fee or who would pay it.

Thanks to the legal work of Mr. Slovacek and Andy Taylor over four years, the Texas Supreme Court agreed and ordered a new election, a decision ignored by the City of Houston until now.  Mr. King provided a detailed presentation showing how the past and present city administrations have spent the nearly $800 million raised on non-flooding budget items such as bike trails and city department salaries.

HAPC and CFGH will be producing and/or distributing more detailed information about what is now Houston Proposition A for the voting information of our pastors and church voters. The following language is what voters will see:

[Relating to the Creation of a Dedicated Funding Source to Enhance, Improve and Renew Drainage Systems and Streets]

Shall the Houston City Charter be amended to establish a Dedicated Pay-As-You-Go Fund, to be used for the enhancement, improvement, and ongoing renewal of Houston’s drainage and streets, funded annually from the following sources: (i)developer impact fees; (ii)drainage charges, to property owners or users, to recover costs of providing drainage to benefitting real properties; (iii)a portion of the City’s ad valorem tax levy; and (iv) third-party contracts, grants, or payments earmarked or dedicated to drainage or streets?